Bulgaria is a country with many faces. Seacoast, plains, hills, high mountains, forests, with rich culture and history, all this make this less known country in Europe a really challenging place to visit. And one of the most prominent places of Bulgaria is Pirin mountain, with Vihren (2914 m altitude), the second highest peak of the country and third in the Balkans (after Musala and Olympus). But Pirin is not just a high mountain, it has its splendid gem, a beautiful town on its foot, called Bansko. This is not only an old traditional town but also a modern winter resort, one of the main gates to Pirin.

We approached Pirin from the north, coming from Rila mountain. After crossing Predela pass, separated these two high Balkan mountain, we entered the beautiful Razlog valley. The splendid image of Pirin, with some spots of snow, even in summer, was rising in front of us. Soon we arrived in Bansko and stopped to explore its old center.

Bansko has been an old village, probably built in the late Roman or early Medieval Bulgarian period. In the 14th century, it falls under the Ottoman rule for about 500 years. And during the last decades of the Ottoman period, Bansko experience a significant revival. This is the time when most of its old houses and streets were built. In 1869 the first Protestant church in Bulgaria was established here.

Then, in the modern period, Bansko became a larger town, preserving and developing the traditions from the Revival period. Until the last 20-30 years, when Bansko experience a new, modern Revival, turning it into the most significant mountain resort in Bulgaria, not only for winter but for the whole year.

We stopped near the center and started walking around the old streets. It was silent and calm. The yards were full of flowers, and the pastoral atmosphere was everywhere. A cart with a horse passed nearby. Some locals were bringing hay from the meadows around the town. We enjoyed it as long as we had time, deciding to come here soon for the second time.

Not many days later, we came to Bansko again. But this time our goal was the mighty Pirin mountain and its highest peak Vihren. This time we approached the town from the northeast, from the valley of Mesta river, running between Rila and Rhodopi mountain. Passing the spa-resort village Banya, we arrived in Bansko. It was late afternoon and the town was quite lively this time.

Bansko is mainly known as a winter resort, being a starting point for skiers in Pirin. Now it is quite developed, to the point to compete with the most famous winter resorts in France, Switzerland, Italy, and Austria. Its old town enriches its resort image more, adding culture and tradition. But, as I said, Bansko is alive in summer too, and the main merit for it is Pirin mountain, which in summer became a favorite place for adventures, hiking, and mountaineering.

You can see the great number of luxury hotels in the town, most of which combined with some traditional or alpine nuance of their image. The most significant of them is Lucky Bansko Apart Hotel & SPA– something like “the King of the hotels” in Bansko. It is normal that in a resort like this, as everywhere in the world, there is a competition between the hotels. And here, in this resort, Lucky Bansko is the winner.

Lucky Bansko Apart Hotel & SPA is located in the north part of the town, near the entrance from Sofia and Rila. It is a 5-star hotel, featuring all that is expected from a hotel of such class. Normally you can expect very high prices for such accommodation, but in fact here the prices are quite low, compare to the quality of the hotel’s service.

Honestly, I am not a fan of hotels, I am an adventure traveler. For me, hotels are only a tool to spend the night (I can sleep everywhere, only if it is not dangerous), not destinations. But there are some exceptions, there are some special hotels in the world, which managed to become destinations themselves, by their history, image, service or unique offers, different than others. Lucky Bansko hotel is one of them, that’s why I mention it here.

When you enter Bansko, you can see Lucky’s dark wooden facade, with a lot of flowers under its windows. When you enter inside, you can feel its vacation atmosphere and its tranquility. Then, if you choose it for your accommodation, you can enjoy a great arranged apartment, with all the luxury, expected from a 5-star hotel.

Then you can enjoy its SPA center- one of the best in the whole country. It features swimming pools, hot saunas, ice room, cold water pool, saline room, hydro massage pool, oriental therapy and many more. What is unique about all these facilities, is that they use super modern bio and therapy technologies.
– Swimming pools: there are a few pools with clean water (without chlorine or other cleaning toxins), cleaned by ionization, ultraviolet light, and sea salt electrolysis. There is a pool for kids too. There is also underwater music and hydro jet in the pool for adults.
– Saline water pool: it is a pool with water, mixed with Dead Sea salt and temperature 33℃
– Saline room: it is a special room for relax, made by Himalayan salt. 50 mins staying inside this room is like 4 hours walking in a pine forest.
– Hydromassage facilities: it includes jacuzzi and a few kinds of hydro massage showers.
– Four saunas: 2 Finland saunas, 1 steam room, and 1 infrared room.
– Oriental baths: Turkish (Hamam) and Arabic (Rasul). There are Oriental traditional methods of bathing in these baths, like using clay on the skin.
– Icy room: a special room, used after sauna, with -18℃ in very dry air.
– Solarium: it is used for tan during the whole year.
– Fish massage: it is a foot massage with Gara Rufa fish, eating the outer skin layer of the foot.
– Fitness center: one of the most modern fitness centers in Bulgaria.
– Matrix-Rhythm-Therapy: a special kind of therapy by vibration influence.
– Waterbed: again with a strong therapeutic effect.
– Cosmetic therapy: all kind of cosmetic functioning- for health and for beauty.

Due to all these services and facilities, Lucky Bansko Apart Hotel & SPA has gotten the “Best hotel of Bulgaria” award.

Check out your accommodation in Bansko and Pirin here:

As I said, now Bansko is the largest ski resort in Bulgaria, followed by Borovets in Rila Mountain, Vitosha mountain and Pamporovo in Rhodopi. It is due to the perfect combination of such an attractive town like Bansko, and such a high mountain right beside it. It has more than 50 km ski tracks, and it is served by 18 lifts and gondolas. The highest lift station is located in 2650 m altitude, more than 1600 m above Bansko town itself.

When we were there, it was summer, so the ski resort was in a halt mode, waiting for the winter. But it doesn’t mean that Pirin is not attractive in summer. There are excellent opportunities for hiking, mountaineering, and trekking in the mountain. So, while staying in Bansko, we were looking south and above, to one of the most beautiful mountains in the Balkans.

It was time to “attack” Pirin mountain. We left Bansko, passing by its last houses and hotels and entered its old dark fir-spruce forest. It was evening and there was a black, wild darkness everywhere. We ascent on the narrow road to Banderitsa chalet, about 1900 m altitude. Outside our car was quite cool, maybe no more than 12-13℃. It was the high boundary of the forest, from here up the high firs and spruces gradually disappear, giving place to alpine white firs and dwarf pines.

We found Banderitsa meadow, a favorite place for camping and pitched our tent there. We were with our children, who enjoyed camping as always. Thus we spent the night, waiting for the next hiking day.

WHAT KIND OF MOUNTAIN IS PIRIN

Pirin is a small mountain in area, but very high, comparing with the surrounding land, rising up about 2000 m above. So, there are not too many places in the mountain, where you can’t see the lowlands around it. But all the natural resources and richness make it some of the most beautiful mountains in Europe.

Pirin has a very clear natural zone structure. The areas below 1000 m altitude are covered with rich deciduous forests. Most of its towns and villages are located in this zone, around the whole mountain. Some of them, like Bansko, Melnik and Sandanski are prominent travel destinations.

Above is the coniferous forest zone (part of the southernmost taiga in Europe), up to 1900-2000 m altitude. Its lowest part is covered mainly by white pines, then higher- spruces and firs, and in its highest part- white firs.

Then, between 1900 and 2400 m is the dwarf pine zone, where the valleys become glacier, and where most of the glacier lakes of the mountain are located. And the mountain’s highest zone is where only alpine grass is growing and the peak’s slopes are covered with a lot of stones.

We woke up in the morning, folded our tent, prepared our hiking clothes and gear, and moved to Vihren chalet, where many hiking groups meet together, using this place as a starting point of Vihren hike. The trail to the peak is relatively difficult, so the hikers were only adults. Our children, as usual, were the only children in the area, admired by others. But children with adventurous parents also become adventurous and start to enjoy it.

The path was steep and stony. It soon went above the dwarf pines, high over Banderitsa river, revealing wider and more beautiful panoramic views. It was sunny but windy, and the wind was strong and cold, so we had to cover our heads, more than everything else. Finally, we approached the summit, south of Vihren peak, on about 2650 m altitude.

At this point, Ying Ying and my son Dani decided to stay for a rest, while I and my daughter Eli proceeded to the peak. They found a calm place with less wind, waiting for us to back. Meanwhile, we climbed the steep slope of the peak until its pyramid, 2914 m altitude.

After an hour, we back to Ying Ying and Dani, and started descending to Vihren chalet. On the way down we saw wild goats. Many goats in small groups. They were afraid of us and didn’t allow us to come nearer than 20-30 m from them. Pirin is a National Park, so its wildlife is rich, and the goats are protected.

The whole trail from Vihren chalet to the peak and back normally is about 6-7 hours for trained hikers. For us, with children, it was 10-11 hours, but it was normal. We back to our car and in the evening descent again to Bansko, then left the area, traveling to Plovdiv in the night.

Usually, we always want to travel to new places, which we have never visited before. But some of the places remain in our hearts so that we always want to back there, again and again. So, we left, but Bansko and its incredibly beautiful Pirin mountain remained as planned destinations for a next time trip.

Check out some travel guides about Bulgaria: 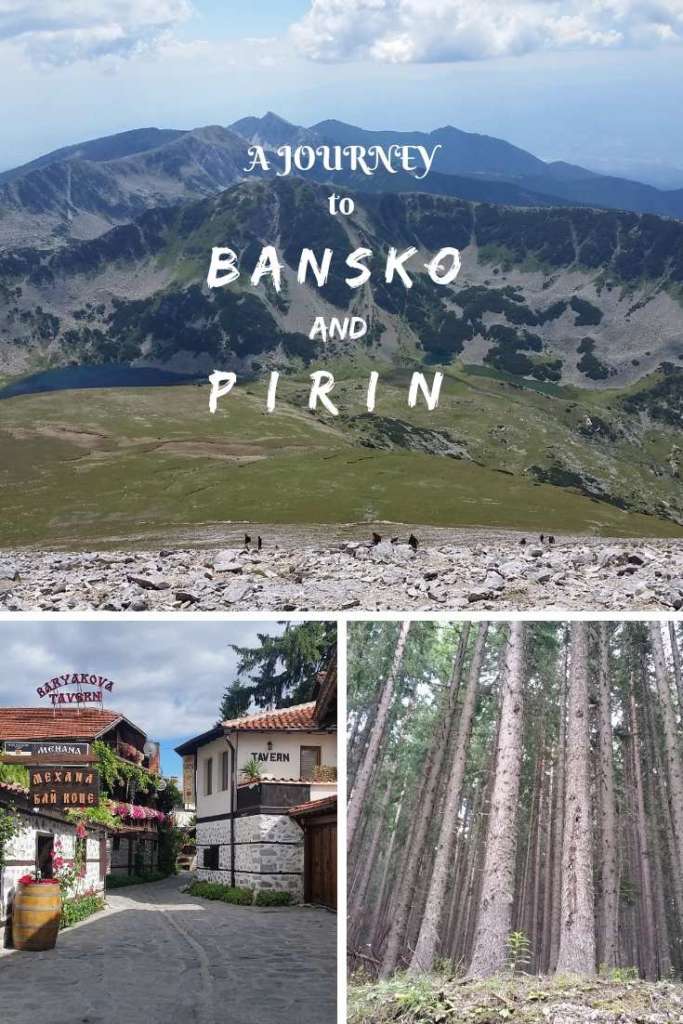 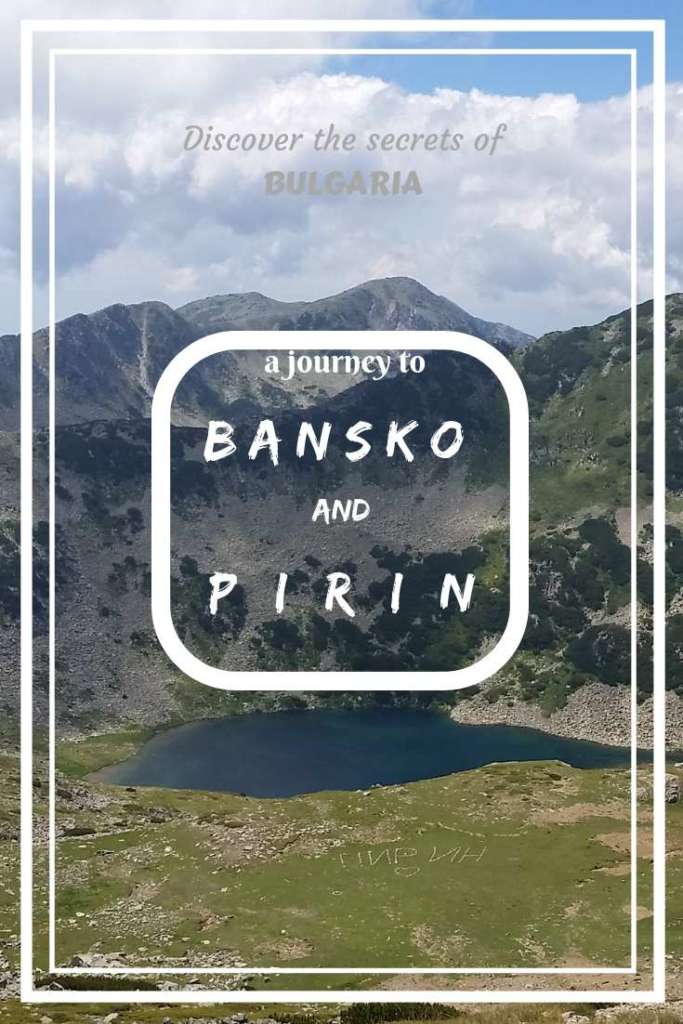