There is a long river that crosses half of a continent, traveling through several geographical zones, and some of the most ancient historical remains in the world. It cuts the tropical desert, forming a green strip, the cradle of civilizations that existed for thousands of years. This is the Nile, and it reaches its most magnificent section in Egypt. Let’s go on a cruise on the Nile and discover its best secrets!

The Nile River comes from the heart of Africa. It is more than 6600 km long, bringing waters from Lake Victoria and the equatorial area around it. Many tributaries join in this area, forming a single, wide, and magnificent river.

In its lower section, the Nile River slowly flows through the deserts of the Sahara. But its shores are not deserted. They are green, with narrow strips of fertile land on both sides of the river. Finally, before it reaches the Mediterranean Sea, it spreads into a large green delta.

This river has been an important factor for many civilizations- ancient Egypt, Nubia, and later a part of the Roman, Arab, and Ottoman civilizations. So, it is full of history, and this history has left a lot of remains.

Ancient Egypt is one of the most famous civilizations in the world’s history. The pyramids, the Sphynx, and the tombs of the Pharaohs, all of these are well-known sites. And they are closely related to the Nile.

The Nile River is also important in the Bible. You can read the stories of Moses and the plagues over the kingdom. One of these plagues was turning the Nile water into blood.

Today, the Arab Republic of Egypt is different than the ancient kingdom of Egypt. But you still can feel the echoes of the distant past. The desert, the oasis strip around the river, the ancient sites, and the local culture that has preserved this history- all of this keeps a lot of secrets to explore.

The whole of the Nile river- from its delta to the great African lakes is too long. Only highly adventurous explorers have traveled along the whole length of the river.

Yes, following the whole course of the river would be a fantastic adventure, but only a few can do it. However, you can explore at least the lower section of the Nile in Egypt- the section between the delta and the Aswan Dam at the border with Sudan. Yes, there are roads following the river shores, but the best way to do it is to float on the river on a cruise.

If you are planning an Egyptian Nile Cruise down the Nile River, the number of options can be a little overwhelming. You want to travel in style and enjoy all the beautiful sights that Egypt has to offer, but where do you start? Keep reading to learn about the top sites you need to visit and which Nile River cruises are the best options.

Must-See Stops on Your Egyptian Cruise

Before you start looking at which cruise has the best amenities, you need to make sure that they are stopping for the right excursions. There are many temples, tombs, and monuments that a trip to Egypt wouldn’t be complete without visiting.

Valley of the Kings

For nearly 500 years, this valley was slowly filled with the graves of pharaohs, queens, and members of the noble court. A popular event for tourists is the air balloon ride that flies over the entire valley, showing the 63 different tombs that have been found.

From that height, it appears as a small city, full of buildings, underground chambers, tombs with sarcophagi, and endless winding alleys and archways. Every structure is covered in faded paintings and carvings that depict the person’s life and journey to the underworld.

This site is called a complex because it is one of the largest temple sites in all of Egypt. A large portion of it is 134 enormous pillars that spread out like a labyrinth and still have carvings and faded paint from long ago. Hatshepsut’s obelisk is the tallest structure there, standing at 30m (or 97 ft) tall.

The temple complex lies inside the ancient city of Luxor, which was known as Thebes at the time. It was built sometime between 220 and 360 B.C. and was dedicated to Amun-Re, the patron god of Thebes.

The Giza pyramid complex consists of three ancient pyramids and the Great Sphinx of Giza. What many don’t know is that there is also a workers’ village nearby, where the master builders and workers were believed to have lived. Egyptians would often live and die working on these magnificent monuments without seeing their completion.

Hatshepsut was one of the only female pharaohs of the ancient world and was known as a master leader and tradeswoman. However, after her death, pharaohs after attempted to wipe her memory from history.

Her temple stands out as a masterpiece of ancient architecture and is right outside of the Valley of the Kings, in Luxor.

Luxury Cruises for Traveling in Style

As mentioned before, there are countless options when it comes to choosing your cruise; Luxor Aswan Nile Cruise or Cairo Nile Cruise. However, if you want to book one that will really grab your attention, keep reading for our five favorite options.

This cruise offers 3, 4, or 7-night cruises between Luxor and Aswan. They provide guided excursions where expert Egyptologists walk you through the history of each ruin, tomb, and temple. Later that night, once you’ve worn yourself out from walking all day, you can enjoy the many relaxing activities back on the ship.

The Sun Goddess Cruise ship has a total of 30 suites; 28 deluxe Presidential Suites, 1 Executive Suite, and 1 Royal Suite with its own jacuzzi. No matter which suite you choose, you will have your own private balcony where you can enjoy a week’s worth of Egyptian sunrises and sunsets.

This cruise offers 4, 5, or 8-day cruises that leave every Monday from Luxor and every Friday from Aswan. Between the two cities, you will stop at Edfu and Ombo for the night, and they offer private tours that allow you to experience Egyptian ruins and tombs with the utmost detail.

Like the Soneta Moon Goddess Cruise, the Tulip Nile Cruise offers 4, 5, or 8-day cruises. The ship recently underwent full refurbishing and now has a sleek and modern feel. It contains 40 cabins that each have full windows and a private balcony, as well as 8 Terrance Suites with private balconies.

Each cabin has tea and coffee, a daily delivery of mineral water, air-conditioning, a television, a hair dryer, and a safe. Other amenities include a sauna, a small gym, a large sundeck, and a restaurant.

The Movenpick Royal Lily Cruise leaves every Monday from Luxor and every Friday from Aswan. You will be sure to see all the wonderful history that Egypt has to offer as you stop at Karnak Temple, Valley of the Kings, the High Dam, Luxor Temple, Kom Ombo, Philae Temple and Unfinished Obelisk, the Edfu Temples, and Queen Hatshepsut’s Temple.

The ship has most of the same amenities as other ships, i.e. a swimming pool, sun deck, spa, and bar. However, this ship also has a gift shop, where you can stop by and grab something special for loved ones at home.

Like other cruises, the Acamar Nile Cruise offers 4, 5, and 8-day cruises that leave every Monday from Luxor and every Friday from Aswan.

The service and experience of this cruise are so exemplary that the cruise was awarded “Acamar Nile Cruise is the Best Boat on the Nile” back in 2004 and received the Golden Crystal Award in 2005. It is said to be a combination of European tradition and modern sophistication, and the relaxing atmosphere makes you feel like coming home after a long day of hiking through history.

Your Next Egypt Tour

No matter which of the cruise you choose that are listed above, you are sure to have a luxurious and homey experience. Touring around the ancient ruins of Egypt will leave you hot, sweaty, and wanting somewhere to kick back and relax. It’s important to choose a Nile River cruise that will allow you and your party to create memories you will keep with you for the rest of your life.

So, these cruises reach the area around Aswan Dam. But the river continues further south (against its floating course), disappearing from view into deserts, and swamps, deeper and deeper into the continent of Africa. It can ignite your explorer’s passion to proceed further into the “unknown”.

Even if you explore only the Egyptian section of the Nile, it would already fill you with a lot of impressions. But if you are more adventurous, you can consider a Nile cruise in Egypt as the first stage of a longer adventure. Just keep your dreams alive!

Take a look at this video for more impressions from the Nile River:

Check some travel books about Egypt and the Nile River: 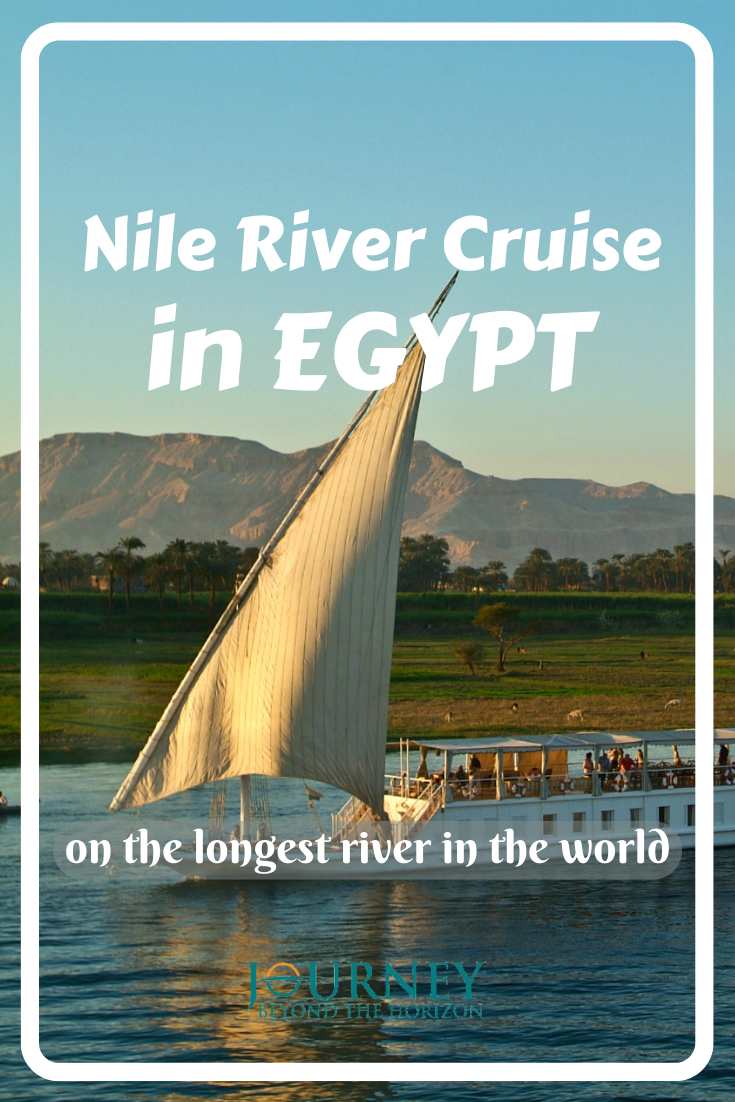 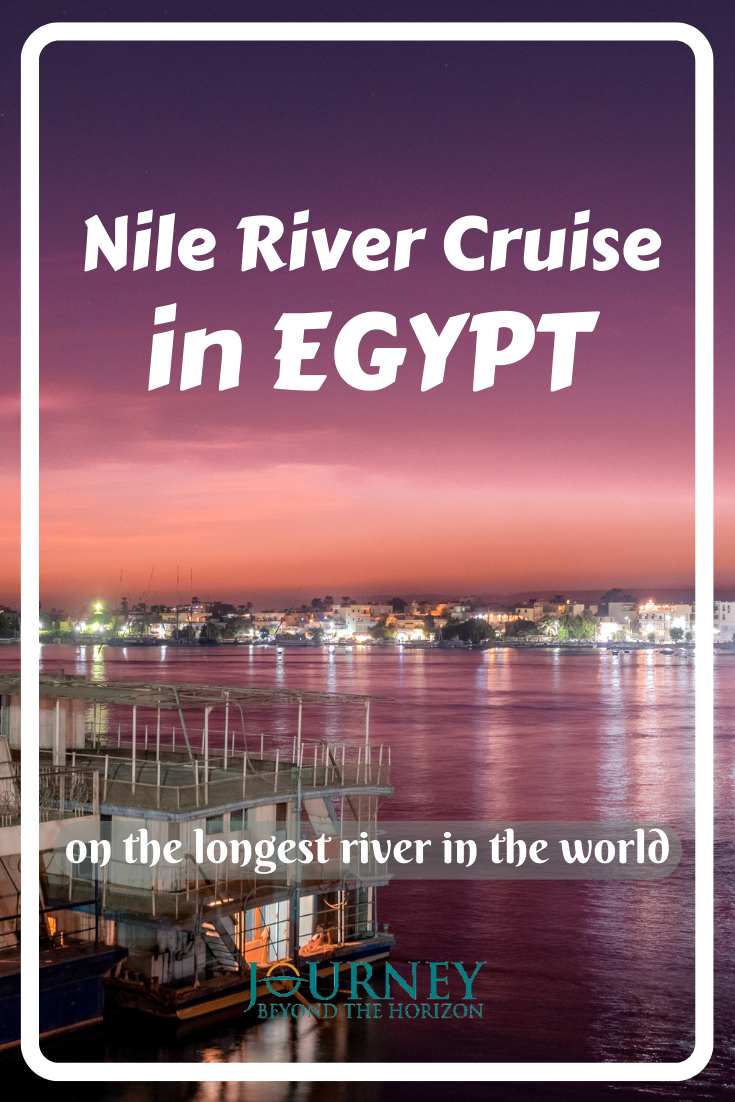 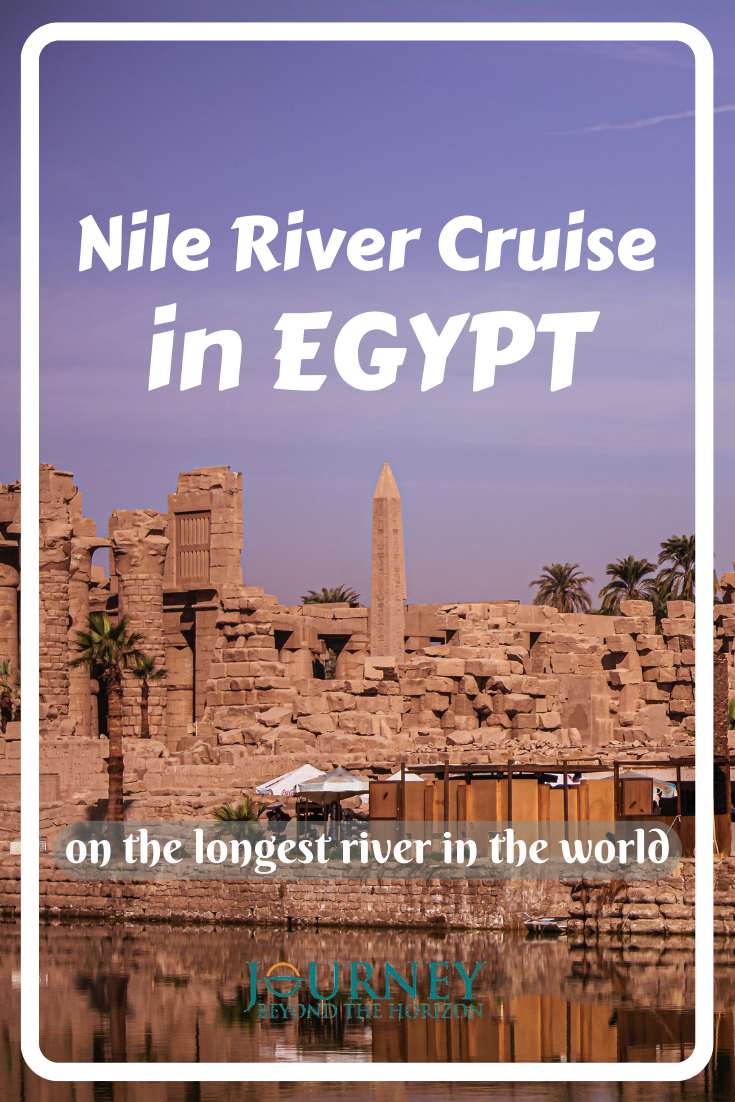