Planning a journey is a thrilling time. Deciding where to go, when, and what to do once at the chosen destination all add to the excitement of going away. For many, a holiday in the UK is becoming the more popular choice than a break abroad. The reasons vary for everyone, but for the locals, it is more about the convenience of not changing currency, worrying about lost luggage, or restrictions in place. However, a full road trip planning for the whole of the British Isles should also include Ireland.

When traveling around the British Isles, there are various modes of transport to consider. Traveling by plane is an option, but the two most popular choices are train and car. With potential train strikes disrupting regular service, going by car is the preferred route for many. Road trips can be the best way to explore the UK and Ireland and encounter various adventures at your holiday destination.

Reasons to go on a road trip around the British Isles

Here are a few reasons why road trips are one of the best ways to explore the British Isles.

Opportunity To Be Greener

Of course, traveling by car might not seem like the greenest option. However, an electric car can make the journey a lot greener. Electric cars are a green vehicle choice that helps owners reduce their carbon dioxide emissions when driving. Requiring no fuel to run, just charging the battery to ensure it has the power to start and drive you to and from your destinations.

Take a look at the ultimate electric car guide by LV ElectriX to learn more about the benefits of choosing an electric car. When planning a road trip, you can look at what service stations along the way have electric car charging points you can use should they be needed.

Opportunities To Stay In Different Towns

Driving from one end of the country to another will take hours, sometimes longer, if there are disruptions along the way. Understandably, the person driving will want to take a break or two on the journey. It might be worth splitting the journey up by spending the night in a town halfway along the way.

This way, the driver can get some rest after a long journey and feel refreshed for the next half of the drive. Additionally, staying in different towns to help split the journey allows you to explore other parts of the UK or Ireland. You might even find somewhere that you consider for your next staycation.

First, let’s start with the fact that the British Isles is an archipelago. So, if you want to explore it, of course, you have to include some ferries in your driving journey. But still, most of the time you will drive.

And the best routes, not only in the British Isles but everywhere in the world are the circle routes, where you don’t just go from point A to point B and back again to point A on the same road. It would be a waste of time, and if you don’t travel by electric car, it would be also a waste of fuel. But if you go on a circle route, you can visit new places all along the route, from the start to the end.

It depends on your time. If you have a longer time to travel, you can plan a longer trip, which means a larger circle on the map. And if you have a limited time, your trip will be shorter, hence the circle will be smaller.

So, if you plan a short trip, we advise you to not aim at the whole of the British Isles. Instead, draw a smaller circle only on a particular part of the British Isles. Besides, there are different styles of travel- some people travel fast due to their limited time, while others prefer slow travel.

Here we will give some good route examples for fast travel. And of course, if you like slow travel, you can always extend the time.

The South of England

This geographical area includes London and the whole of the southern coastal region of Britain, including the Cornwall Peninsula. Normally, London would be its starting and ending point. And if you are a foreigner and have never visited London before, you should plan at least 5 days to explore it well, before leaving for a journey.

From London, first, you can drive to Canterbury and Dover, where you can see the White Cliffs. Then, you can travel westward, following the coastline to Portsmouth and Southampton, where you can detour by ferry to the Isle of Wight.

Here you can leave the coast and drive northward to one of the most popular landmarks of England- Stonehenge near Salisbury. Then, you can back to the seacoast again and proceed through Exeter and Plymouth to the westernmost tip of Cornwall Peninsula- the “Land’s End”.

From here, you can follow the northern coast of the peninsula to Bristol. Finally, you can back to London through Gloucester, Bath, and Oxford on the way. The whole journey would be between 1000 and 1200 miles, for at least 2 weeks.

Wales is a beautiful country, a part of the UK with its unique culture and nature. Unlike England, here you can’t find large cities like London or Birmingham, but your focus would be history and nature. However, the best route still would include parts of England, and the most obvious starting and ending point would be Birmingham.

From Birmingham, you can drive to Gloucester and start following the seacoast. On your way, you would visit Cardiff, the capital of Wales, then follow the coast along the St. George Channel and the Irish Sea until you go out of Wales back to England through Chester.

During your journey around Wales, you must explore at least one national park, and the most popular and beautiful one is Snowdonia. Optionally, when you go out of Wales, you can also include the nearby famous cities of Liverpool and Manchester. The whole route is around 700 miles long.

The North of England

For this part of England, you can start your journey from London, Birmingham, Liverpool, or Manchester and the most obvious starting and ending points. The route goes entirely within England, following the border with Wales, the western coast, the border with Scotland, and the eastern coast.

This route would have several versions, often penetrating deep into the land and far from the sea. It would include the large cities mentioned above (of course, if you already have been to London and prefer to include it in your South England route, you can skip it for the North England route).

On your way, you would see a lot of historical landmarks, including many castles, as well as some beautiful villages. And also, you would visit some national parks. The best of them is Lake District National Park. The whole route would be between 700 and 900 miles.

This is the wildest part of the British Isles, with its own image- fantastic natural landscapes, mountains, lakes, and rugged seacoast, combined with a unique culture that includes a man with a skirt playing bagpipe.

The best starting point for a driving journey around Scotland is Edinburgh- a city full of history, listed as a UNESCO Heritage Site. From here, your circle trip first can go westward and then follow the coastline, including the island of Skye, reaching the northernmost points of Britain and visiting places like Glasgow, Inverness, Aberdeen, and of course, the famous Loch Ness.

The whole route would be between 800 and 1200 miles long. But Scotland is the best area in the British Isles where you should combine your car driving journey with some ferry or local air trips to the nearby archipelagos- Hebrides, Orkney Islands, and even the remotest Shetland Islands. Also, including a few days of trekking would be worth it too. Of course, it would extend your journey by at least a week or two, but if you have time, you would not regret it!

Now, let’s cross into the second largest British Isle- Ireland. Here, for this trip, you have to travel in two countries- UK and Ireland, but geographically, it is still one land. However, you have to cross a country border twice.

The most obvious starting and ending point of this route is Dublin, the capital of Ireland. If you haven’t been there yet, we would strongly recommend planning at least 3 days to explore it before leaving for the journey.

From Dublin, your route would follow the coast of Ireland. But you still can make detours to the interior of the island to some more interesting spots, anyway, the best of Ireland is still at the coast. So, you drive to Cork and reach the western coast at Dingle. Then, you pass through Limerick, Galway, and the most popular national park- Connemara.

From there, you proceed to the UK, North Ireland, visiting Londonderry and Belfast. Finally, you cross the border again to Ireland and back to Dublin. The whole route is between 850 and 1000 miles and again, we would recommend at least 2 weeks to accomplish.

Around the whole of the British Isles

This is for those who have a lot of time- at least a month. It would be a combination of all of the small routes described above but would cut some sections and combine with other sections to become a whole route. And of course, it would include ferry sections, mainly between Liverpool and Dublin. And in this journey, it is also worth including the small Isle of Man, again connected by ferry to Dublin, Liverpool, Belfast, and Heysham.

The whole journey can be more than 3000 miles long, starting from London, following the coast of Southern England and Wales, then crossing the sea to Dublin and accomplishing the whole Ireland route described above.

From Dublin, you can go to the Isle of Man, and then to Liverpool. And from Liverpool, you can follow the coast of Britain to the northernmost points of Scotland, with ferry detours to the nearby archipelagos, and finally returning to London. Needless to say, it would be an epic journey giving you a full impression of the British Isles!

Take a look at this video for more impressions from car the British Isles:

Check some travel books about the British Isles: 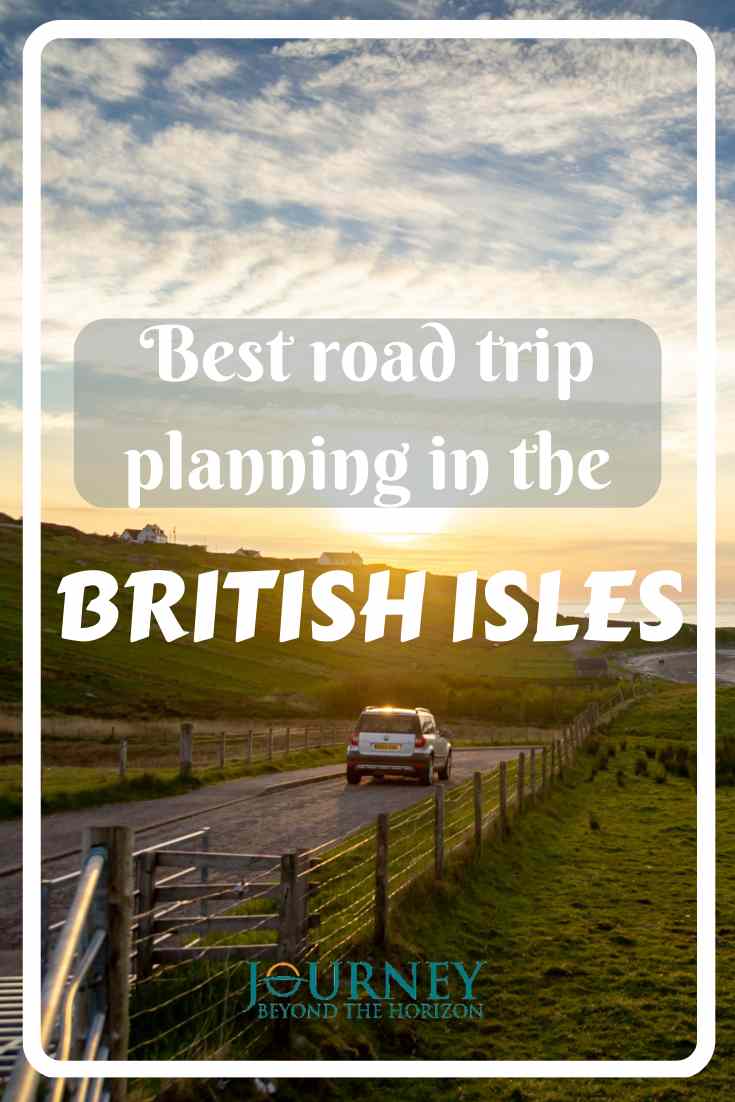 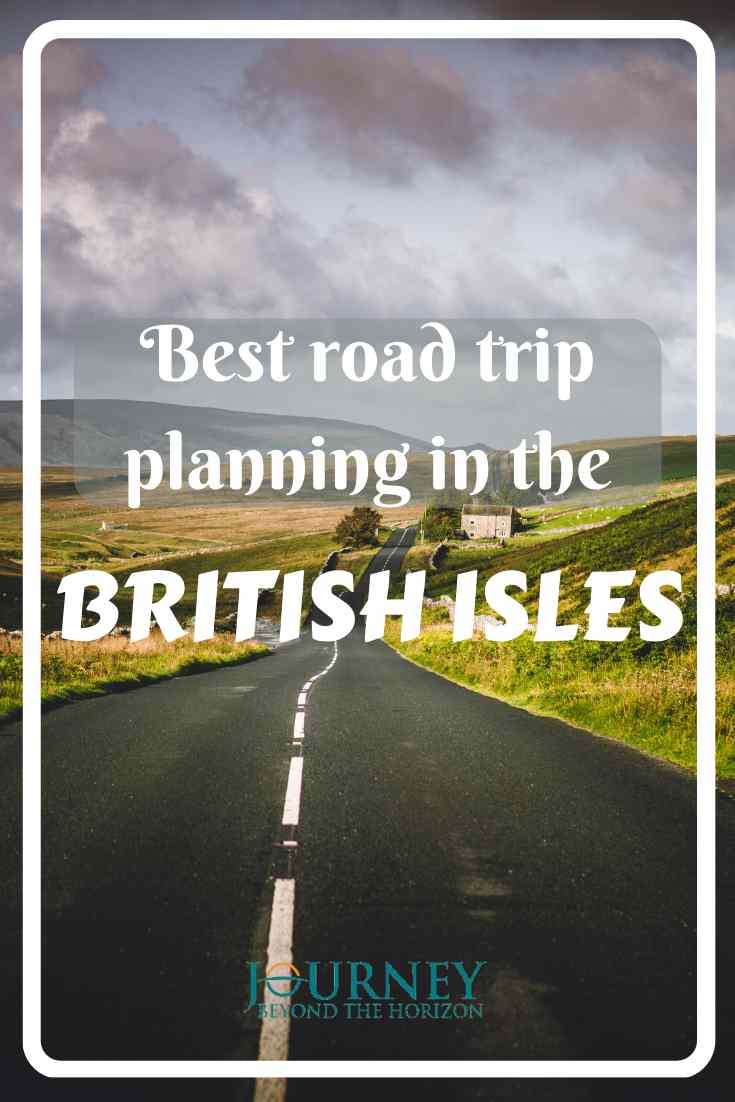 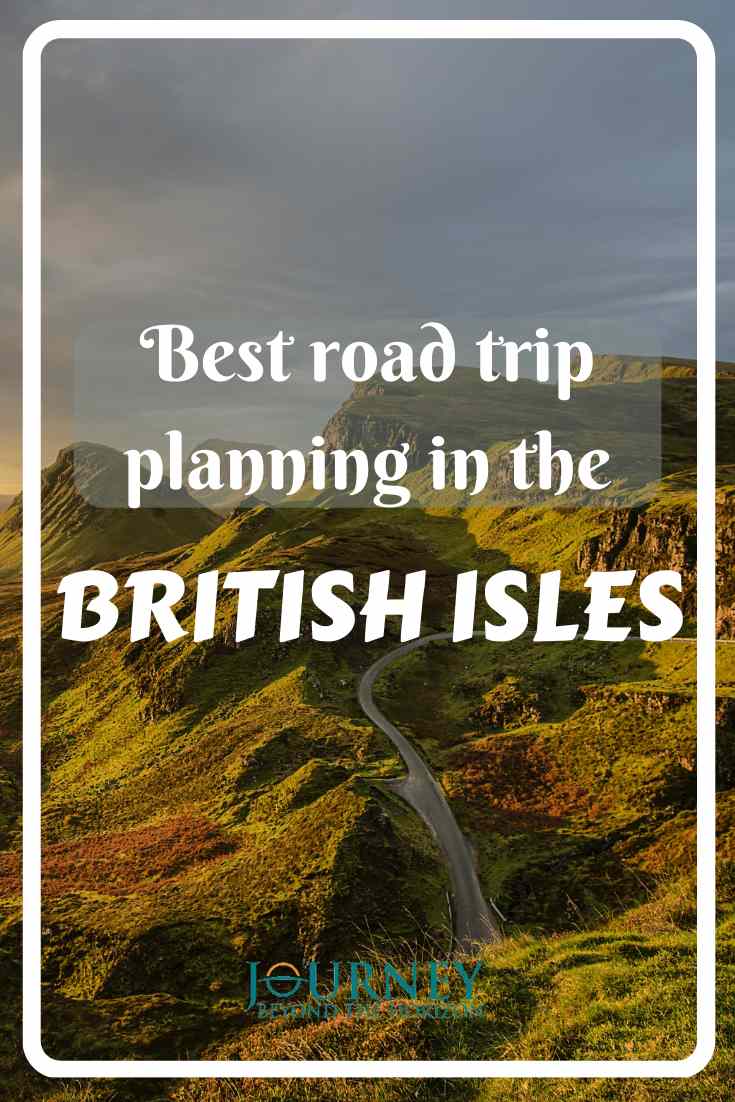