Central Asia is a vast area, full of amazing landscapes and deep history. Located in the middle of the continent, between the large empires from the past, far away from the ocean, it has been a long time a mystic territory, known with its deserts, high mountains, endless grasslands, and furious nomadic warriors. A long time ago it became a place, where these large empires gradually established contacts- not only trade but also cultural and spiritual, by a famous route network, called Silk Road. There are many remnants of Silk Road’s age, some of them really unique. One of these remnants is the mysterious Tash Rabat- a caravanserai in the middle of the stunning landscape of Tianshan mountains, Kyrgyzstan.

The story began a few thousand years ago. The vast territories of Eurasia have been very sparsely populated by nomadic warriors. The rising powers like Egypt, Greece, Babylon, Assyria, ancient India, and China were isolated by this endless and dangerous area in the middle of the continent. The only trade movement in Central Asia has been established on the so-called “Steppe Route“, where the ancient nomads exchanged various things like horses, weapons, and others.

Around 7-6th century BC the big world powers of that age began turning into strong empires, conquering vast territories, and penetrating deep into Central Asia. The first was Achaemenid Persia, followed by Macedon of Alexander the Great. At that time the first contacts between the West and the East have been established. From the Eastern side- China has been united by Emperor Qin, then Han dynasty reigned over Qin’s territory, expanding it more and more westward.

Thus the empires connected each other, and the new trade network between them was established. One of the most precious products, coming from the East, was silk. In exchange, a lot of European artifacts traveled from West to East, enriching the empires not only with goods but also with new cultures, religious influence, and knowledge. Thus the Silk Road was born.

Centuries passed. Empires rose and fell- in the West, South, and East. The Silk Road also passed its golden ages and its declines. Caravans traveled in both directions on all the routes of this amazing trade and cultural network. They crossed peaceful areas and tried to avoid war areas. They crossed deserts, grasslands, and high snowy mountains. And they needed some rests on their way- not only for relax but also for their trade with the locals. And since the trade was a good benefit for the locals, they built a lot of trade stations on the routes, called “caravanserai”.

Most of the caravanserais were built in the oasis areas or near the big cities. But there are some of them, located in very remote and harsh areas. One of them is Tash Rabat, in Kyrgyzstan. It is built on 3150 m altitude, in the grassland wilderness of At-Bashy range of Tianshan. Visiting the surrounding landscape, combined with this piece of mysterious history is a really amazing experience.

Why mysterious history? Because actually even until now, nobody can say for sure what was this building built for. Some scholars say that it has been used as a trade station, where the trade travelers exchange their goods. Others say that is has been a sleeping lodge, something like a hotel. A third hypothesis is that it has been a prison. A fourth- it has served as a religious Nestorian site since the Nestorian branch of Christianity has been spread on the Silk Road. And the last, fifth hypothesis- it has served as a military garrison.

But if you see the caravanserai’s location and enter inside- there is nothing, which can confirm 100% one of the five hypothesis. The building is inclined inside the mountain slope, with a labyrinth of rooms and corridors inside, with the main hall in its backside. The rooms have holes above and usually very low doors to enter. And there is no inscription or something else to give a hint what has it been. Even the local people don’t know more than the scholars.

All this mystery, along with the stunning Tianshan’s landscape, made Tash Rabat a MUST destination to visit, during our short itinerary in Kyrgyzstan. The place is really wild, and nothing to do with luxury tourism. No public transport to Tash Rabat. No paved road. No electricity there. No WIFI and mobile connection. No shops. No hotels. Only a few yurt camps and guesthouses with very basic conditions. It is a place for travelers, a place for adventures. And it is actually part of its beauty, these conditions preserve the mystery of the area and I hope it will not change in the future.

HOW TO REACH TASH RABAT

There are two main ways to reach Tash Rabat. The first one is using the arranged by one of the yurt camps transport. The second one is to rent a car from a big city like Bishkek, Naryn, Karakol or Osh and drive by yourself (but the car must be proper for dirt and uneven roads). And another way is to take a marshrutka (minibus) or other transport to Torugart pass direction, tell the driver to stop on the dirt road to Tash Rabat, then walk 5-6 hours to the goal.

We chose the first way, as a part of our trip in Kyrgyzstan. There are four yurt camps in Tash Rabat area. We contacted Sabyrbek yurt camp, located exactly in the place, where two mountain valleys join in one, on 10 mins walk from the caravanserai. They arranged a car with their driver, who picked us up from Naryn and dropped us in a village near Koshoy Korgon, from where we got a shared taxi to back to Bishkek. And the whole transport (Naryn-Tash Rabat-Koshoy Korgon) cost was 3800 KGS. However, if you go to the nearer At-Bashy town, the whole transport cost will be 3000 KGS.

The accommodation in Tash Rabat yurt camps, as I said, is very basic. You can sleep in yurts or in a guesthouse. There is no electricity, but they use a generator few hours a day, usually at the afternoon and evening. Sleeping in a yurt is cold, at night even in summer the temperature can drop down to 5℃, even lower. In the guesthouse is a little better, they have a central heating, which they turn on at evening for 2-3 hours. No contacts to charge your phone, only in the main hall of the guesthouse, if it is free. The toilet in Sabyrbek yurt camp (and similar in the other yurt camps) is nice and clean but is about 100 m away of the guesthouse and yurts. Washing teeth, face, and hands- in a water tap outside. For body washing- there is a bath outside, separated from the yurts and the guesthouse. 300 KGS per bed/night and 200 KGS for a bath.

About the food- they prepare meals for breakfast, lunch, and dinner. And the meals are quite delicious, in a dining yurt, richly ornamented with Kyrgyz traditional art. Along the meals, they offer free nuts, dry fruits, sweets, biscuits, and other snacks. The only things that you can buy from them are water and beer. The lunch and dinners were 400 KGS and breakfast- 200 KGS. So, if you want to eat something different than their meals, you have to buy in advance.

Sabyrbek yurt camp is managing by a nice family from Koshoy Korgon- the host Cholpon, her brother, who is the driver, and her parents. Cholpon can speak good English, so communication is not a problem. So you can contact Cholpon in advance in their website here or on their Facebook page.

Once you arrive in one of the yurt camps, the first place to walk is the caravanserai. When we were there, we found its gate locked, so we entered the nearest yurt camp in front of the historical building. There was an old woman, who manages the site. She went to the gate, opened it and we paid our 100 KGS entrance fee. Then she patiently sat down, waiting for us to finish our visit.

Then we walked on the grassland slopes and hills around. No need of roads, just walk on the grass. There is a nearby hill, right beside the caravanserai, where you can climb to its peak, revealing a fantastic panorama to the area around. I personally tried walking and climbing at least two more slopes over the valley. The views are incredible. Anyway, this is just for few hours enjoying the area of Tash Rabat. And you can often see wild marmots, hiding in their holes or running around.

But there are options to go further away. The most famous route is the trekking to Chatyr Kol lake. Here are the prices from Sabyrbek’s yurt camp:

Since Chatyr Kol lake is near the Chinese border, you need a permit to go there. It is 1000 KGS normal and 1700 KGS urgent service. For more info see here. You can take the whole route to Chatyr Kol and back within one day on a horse. There are also many other routes in various directions, which you can take for a day or more, passing through wild and remote valleys and summits, very rarely visited by humans.

The history goes on…

After the 15th century, the famous Silk Road gradually declined in oblivion, remaining in the past. Recently a new Silk Road is establishing. But it is modern, not by horses or camels, but by trains and trucks. There is a plan even for a speed train network between West and East. Anyway, it will run on lower and more convenient routes. So, Tash Rabat will remain a mysterious and remote secret, hidden somewhere in the fantastic scenery of Tianshan, known only by the locals and by travelers.

Get more impressions from the video below:

Check out some travel guides and stories about Kyrgyzstan and the famous Silk Road: 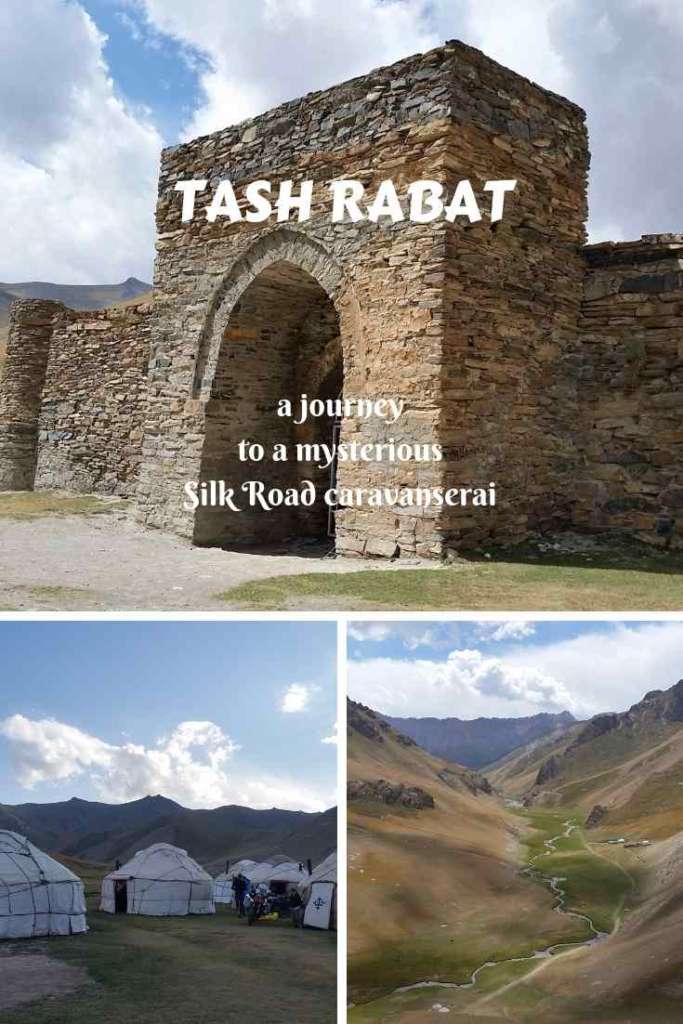 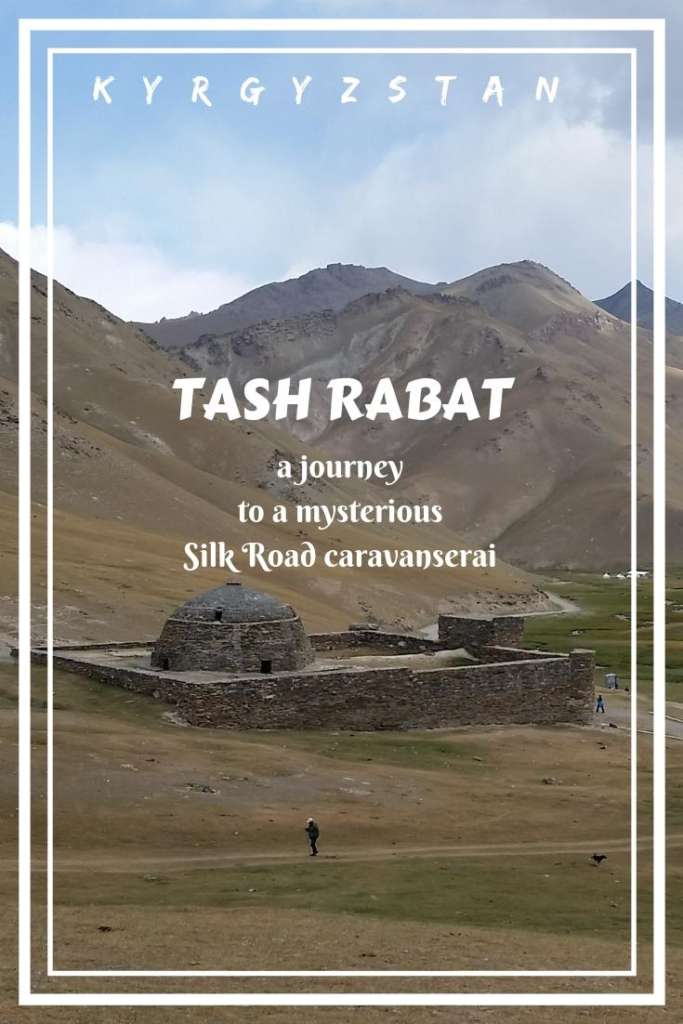