The waters around the islands of the Philippines are full of secrets and beauty. Various inhabitants live in the crystal clear seas, and some of them are really large. The biggest ones of them are the whale sharks- the biggest existing fish on Earth. But they are not like the „bad sharks”. They are the most peaceful gentle giants in their underwater world. And Donsol, a small town in the southeastern end of Luzon Island, is one of the best places to see the whale sharks.

Basic facts about the whale sharks

The whale sharks are slowly moving giants, with permanently opened mouth. But their mouth has no big and sharp teeth- they are filter-feeding sharks. They eat plankton and small fishes only, and they never threat humans. There are only two other filter-feeding sharks on Earth- the megamouth shark and the basking shark. But they are smaller than the whale shark. The megamouth sharks are deepwater species and are extremely rare. One of them has been caught near Legazpi, Luzon Island, but don’t expect to see more of them. And the basking sharks like cooler waters and couldn’t be found in the Philippines. So, let’s focus on the whale sharks.

The largest discovered whale shark (which is the largest fish ever seen) was more than 18 m (59 ft) long, but it is unlikely that you could see such a large shark. Normally, the largest adult whale sharks are not longer than 12 m, and most of those sharks that you can expect to see are between 6 and 9 m.

These giants like warm tropical waters, so the Philippines is a great area for them. There are many places near the islands of the archipelago where they roam, but some places are their favorite, which means they seldom leave. The two most popular of these places are Donsol and Oslob, and if you want to see whale sharks, plan your itinerary to one of these spots.

Our trip to Donsol

We wanted to design our Philippines itinerary so that we could explore as much as possible from this country. And seeing a whale shark was one of our goals. So I had to plane our route through Donsol or Oslob. After I read a lot of information about these two places, I chose Donsol.

Why Donsol and not Oslob

Both Donsol and Oslob are whale shark destinations. But they are different. In Oslob, the whale sharks are more like „domestic animals”. They are a bit smaller and they are regularly fed with shrimps by the local tour guides. The whole tourist spot in Oslob is a small area, often crowded with whale sharks and tourists. Attracted by the food given to them, the whale sharks have changed their natural behavior, and it is unclear how much impact it has on them. At least one thing is sure- if you go to Oslob, you WILL see and even touch the whale sharks (although it is not allowed, but who can observe the rules strictly!).

But Donsol is different. In Donsol, you can see real WILD whale sharks, in their natural habitat. Nobody feeds them (it is prohibited!) and the whale sharks return there seasonably, just like they used to do it for thousands of years. Maybe, for this reason, the whale sharks in Donsol are a bit larger than those in Oslob. And when you go on a whale shark tour there, it is more like an expedition searching for wild whale sharks, rather than visiting a „sea zoo”.

That’s why we chose Donsol. Furthermore, Donsol was more convenient concerning our itinerary route, with the nearby Mayon Volcano. The only negative thing was that since the whale sharks in Donsol are wild, you can join a tour, but may not see any of them.

How to reach Donsol

There are not too many ways to reach Donsol, yet it is not difficult to reach. The main point for traveling to Donsol is from Legazpi. Regular vans are traveling from the Legazpi Grand Central Terminal, near SM City Mall. We arrived by plane to Legazpi from Cebu, then by tricycle (for 50 PHP) we went to the Central Terminal from the airport. And vans were departing for Donsol when they are full (no fixed schedule). But they were full quickly, so we didn’t need to wait long. The whole trip to Donsol was around one hour and a half, and we paid 100 PHP per person.

And another way to reach Donsol is by a jeepney. When we had to back from Donsol to Legazpi (it was around 2:00 pm), there were no vans in Donsol Bus Terminal leaving for Legazpi. But there were jeepneys traveling to Daraga, so we used this way. The only thing you have to do is to go to Daraga Bus Station (or the nearby Shell Gas Station), which is just in the western part of Legazpi, and get a jeepney to Donsol. The trip is a bit longer, almost 2 hours, and we paid 60 PHP.

Check your transport to Legazpi!

Donsol can be reached also from other places. We initially had planned to arrive there from Masbate, by ferry to Pilar, then by jeepney or tricycle to Donsol. There are also similar ways to travel to Donsol from Sorsogon, Tabaco or Naga. Anyway, we came from Legazpi, and it was evening. We arrived in the dark, so our whale shark watching tour was planned for the next day. However, there was still something that we could do in Donsol- a firefly watching tour.

Actually, our destination was not Donsol Town itself, but the resort area west of it, on the western side of Ubod River. And the first thing that we did was to arrive in our accommodation place- Dancalan Beach Resort.

I chose Dancalan Beach Resort because I found it the best place for the coming whale shark cruise. The resort had three advances. First, its location is the best, concerning the whale shark tour the next morning. It is right beside the Whale Shark Interaction Center and the wharf for the tour, and it is at the nearby beach at the same time. Second- it was cheap. We paid only 935 PHP for a room in a bungalow (yes, it was not so luxury, but still great for its price). And third- it was really nice and comfortable. It has a restaurant, which is also a cafe bar, and around it several bungalows in a beautiful and clean yard with coconut palms.

Check your Donsol accommodation in Booking!

Check your Donsol accommodation in Agoda!

The fireflies are the second attraction in Donsol, so we didn’t miss the opportunity to see them. So, one of the girls of the Dancalan Beach Resort personnel organized an evening firefly watching tour. We had a tricycle driver, who took us to the tour starting point, and after that took us back to Dancalan, for 200 PHP. It was some 7 km to the Firefly Watching Center at Ogod River.

We arrived there and paid 1250 PHP for a boat with a guide and a boatman. The whole river tour was about an hour. Honestly, I expected all (or at least most) of the trees to look like shining Christmas trees by fireflies, because at least it was what I have seen in Instagram and other media (so, don’t forget that the photo images are often not the same as the reality!). But actually, everything was dark, and we saw only several shining trees. There are only certain trees, chosen by the fireflies to establish their colony, and the tour guide knew exactly where were these trees.

Besides, don’t imagine strong light. Although there can be thousands of shining fireflies on the tree, they can’t emit enough light for normal photos. In fact, their united light is still weaker than the moonlight, so if you want a good photo, you need a properly prepared camera for that. We didn’t have it, but at least we enjoyed a nice time on the river, learning a lot about these cute insects.

So, on the next morning, the time came for our main goal for visiting Donsol- the whale shark watching tour. We had to be in the Whale Shark Interaction Center at 7:00 am. First, we paid our fee- 3500 PHP for the whole boat and 300 PHP entrance fee. Every boat is for 6 passengers, a boatman, a watchman, and a BIO (Butanding Interaction Officer), who shares all the knowledge about the whale sharks that we need (and want) to know and guide us when and how to jump into the water to interact with the whale sharks.

First, our BIO instructed us about the rules. Unlike Oslob, the whale watching tour in Donsol is much more eco-oriented activity and there were certain rules to protect the environment of these animals as natural as possible. Only one boat with 6 people per whale shark is allowed. Touching, feeding or standing in front of the animals is not allowed.

In quest for a whale shark

The cruise tour started around 8:00 am and more than 20 other boats got deep into the Bay of Donsol. The watchmen were on the highest masts of the boats, watching for whale sharks. We sailed in various directions for almost one hour and a half, but couldn’t see any whale shark.

Suddenly we saw all the boats moving in a certain direction. Obviously, they have seen a whale shark. Everybody forgot about „one boat per whale shark” rule, and we all aimed straight to the spot with the shark. Many people were in the water and we had to wait for a while. When our turn came, our BIO told us to jump into the water immediately, because the whale shark was going to sink deeper. Unfortunately, it was too late. When we jumped, we could see only a large dark blurry shadow under us, and it quickly disappeared.

Then we spent another hour and a half, starring into the water, roaming throughout the Bay of Donsol. But we didn’t see anything, no more whale sharks. We were a bit disappointed, but this is the reality in Donsol. It was an eco-expedition, after all, and it was most important. Remembering this, I convinced myself that we didn’t waste our time and money here.

Can we blame the clouds if we can’t see falling stars? Can we blame the weather if it is bad and stops us from a mountain trek? Or can we blame elephants if we want to see them, but just today they are hidden deep in the jungle? If we were selfish tourists, looking only for their own entertainment, most probably we would regret. But we are travelers. We have accepted the reality of nature, and we approved that nature was more important than the visitors.

Check for diving activities in Donsol!

While we were floating by our boat on the Bay of Donsol, we almost couldn’t see any whale sharks, but we could see something else from the sea- a distant volcano with a perfect conical shape. It was Mayon Volcano, and it was our next destination. So, we left Donsol by jeepney back to Legazpi, heading to this beautiful volcano, and leaving the gentle giants of the sea in their natural environment.

Donsol or Oslob? Watch the video below!

Check out some books about the Philippines and the underwater world!

Disclaimer: Journey Beyond the Horizon is a participant in the Amazon Services LLC Associates Program, an affiliate advertising program designed to provide a means for us to earn fees by linking to Amazon and affiliated sites at no additional cost to you.As an Amazon Associate I earn from qualifying purchases. 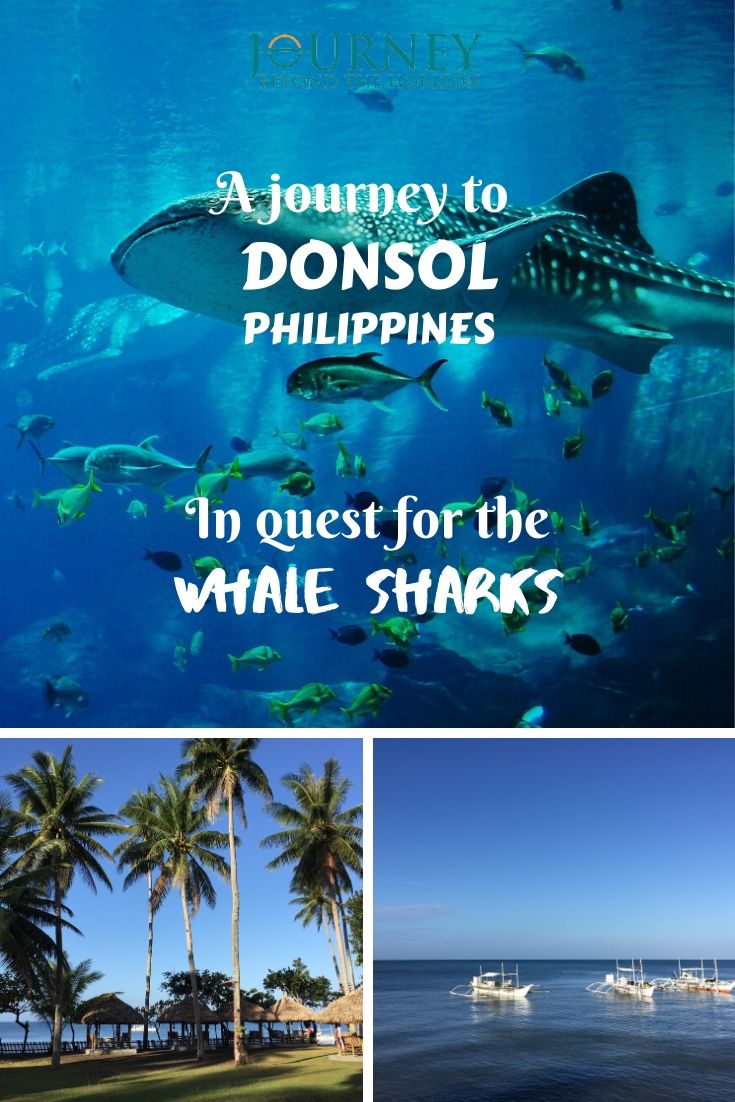 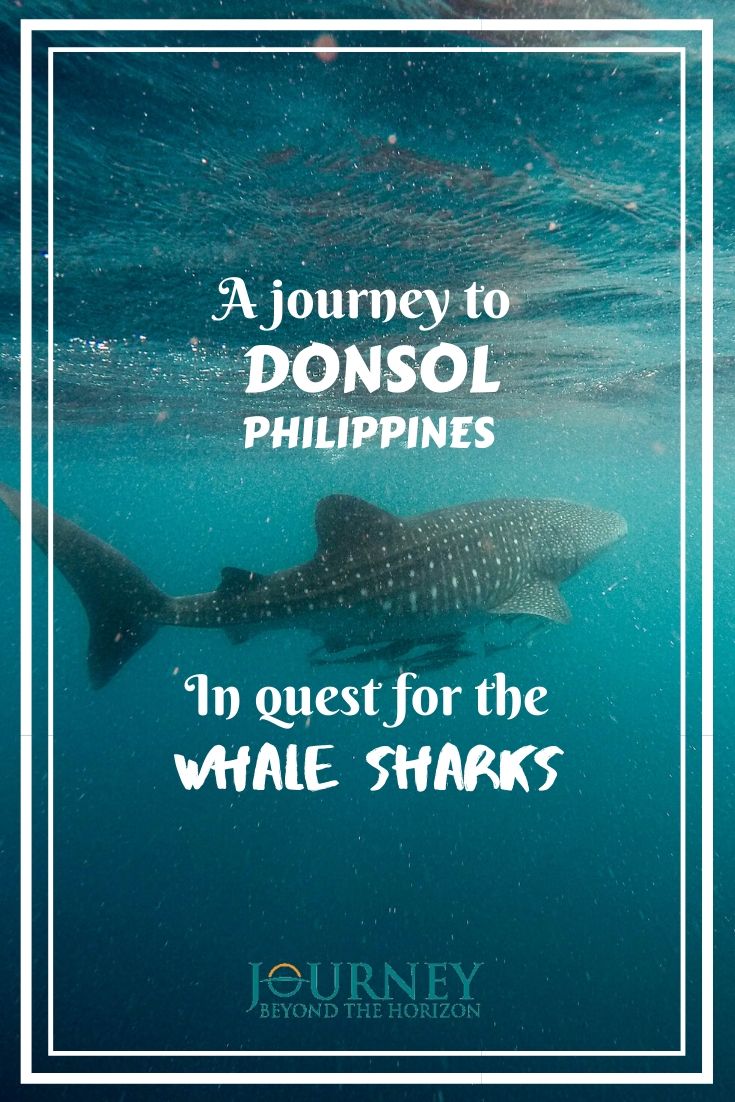