Have you noticed how volcanoes are drawn on pictures, cartoons or comics? In these fantasy stories volcanoes can be on Earth, or on an alien planet. Usually they look perfectly conical, with a smoking hole on their top. Do you know that such a volcano really exists? It is located in the Philippines. Its name is Mayon Volcano, and one of the best views to its beauty can be observed from a city, called Legazpi. So, if you travel around the Philippines and your itinerary route passes nearby, don’t skip this amazing volcanic image!

Mayon is one of the Pacific Rim volcanoes, located in the southeast end of Luzon Island. It is 2462 m high, and is the most active volcano in the Philippines. Its eruptions are not very strong, but are quite often and regular. It is well known for its perfect conical shape. Its crater is small and narrow, but there is always something getting out of it. Sometimes it is erupting lava. But even in its most quiet periods, there is always a tiny stream of smoke.

The volcano is located in a highly populated area, near the Albay Gulf. It is surrounded by several cities and many villages. The largest of them is Legazpi, and it is usually the most popular starting point for visiting and exploring Mayon Volcano. That’s why we chose it as a Mayon destination. But let’s learn more about Mayon and the history of the area around.

The area around Mayon Volcano and the present day Legazpi has been always a place exposed to various natural disasters- volcanic eruptions, earthquakes and typhoons. Nevertheless, it has flourished civilization since ancient times.

The Spaniards came in 1569, lead by one of the Legazpi’s conquistadors, and added this area to the Spanish Empire. They built some churches, of which some remained until today, although in new versions. During the most of that time, there wasn’t a city called “Legazpi”, but many small towns and villages in the area. One of these towns was Cagsawa, built on the eastern foot of Mayon Volcano. But it had unlucky fate.

In 1814, a deadly eruption came from the throat of the volcano. It devastated the whole area around what is today Legazpi, mainly by ash and volcanic bombs, causing fire and destroying the rivers. And the effect on Cagsawa was the deadliest- 1200 of its citizens died in the disaster. Most of its buildings were destroyed, and the only prominent construction that can be seen today is its church tower.

Most of those who survived the eruption left the area. But later many of them returned, founding a new settlement, called Binanuahan. It quickly united with the neighboring settlements, forming a city, called Albay Nuevo. And in 1856 it was renamed into Legazpi. Thus the modern city of Legazpi was born.

Later it passed through all general events happened in the Philippines- the end of the Spanish rule, the Philippine Revolution, the American period and the independent Philippines. During that time Legazpi has lost its city status two times, then again was declared as a “city”. Finally, it gradually turned into a tourist destination. And all the time the magnificent Mayon Volcano is looking over Legazpi, most of the time “in good mood” with tiny white smoke, but sometimes (in fact, quite often, at least once in several years!) it is “angry” and “furious”.

Our trip to Legazpi and Cagsawa

So, knowing all of it, we planned Legazpi and Mayon Volcano as a part of our Philippines itinerary. We arrived from Cebu by plane. But before focusing on Legazpi and Mayon, first we made a trip to Donsol, trying to see its whale sharks. Donsol is some 45 km away from Legazpi, but even from there, during our whale shark cruise, we could see the distant cone of Mayon Volcano. And after the cruise we back to Legazpi.

Check your transport to Legazpi!

What to see in Legazpi

There are not too many attractions in Legazpi City itself. It is just a colorful city, full of resident areas, malls, parks, some new churches, jeepneys, tricycles, and many other kinds of transportation. A colorful place, full of life. And as everywhere in the Philippines, there are many church buildings in the city. Of them the most beautiful one is San Raphael’s Church, near the center and LCC Mall. Rizal Park is at the other side of the mall- a favorite place for the locals.

Maybe the most beautiful part of the city is its sea coast (its southeast section). You can walk at the coast and visit the nearby Sleeping Lion Hill and the Legazpi Monument- two of the city’s landmarks. Then you can proceed your walk along the so-called Puro Beach. You can reach the Legazpi Tourism Marker and from there you can enjoy a great panoramic view to the Albay Gulf, the city on its coast and the magnificent Mayon Volcano rising behind it.

There are more places to visit in Legazpi, but all of them are related to Mayon Volcano, so it is time to focus on it.

Check your Legazpi accommodation in Booking!

Check your Legazpi accommodation in Agoda!

The first and nearest to the city center place to observe Mayon is a park, called Lignon Hill. It is a nice place with some local attractions, such as a zipline and some others. But the most important part of the park is its panoramic view deck. From here you can make stunning volcano photos.

There is one more important place in Lignon Hill. It is not so attractive, but is very important. Actually, you don’t need to visit it, but you must check its website, if you want to hike Mayon Volcano. This is the headquarters of PHIVOLCS– The Philippine Institute for Volcanology and Seizmology. From there you can get all the information about the current status of the volcano, which, needless to say, is very important for your life during a Mayon hike.

This is the most popular and interesting place in Legazpi, related to Mayon Volcano. That’s why it has become Legazpi’s main landmark. This place takes you back in time, and at the same time you can enjoy stunning views to the volcano, along with the old Cagsawa Church tower, which remained still in time, since 1814.

We arrived in Legazpi from Donsol and slept in Commuter’s Inn, a nice budget hotel in the southern parts of the city. Then we made our Cagsawa trip on the next morning. Unfortunately, it was cloudy with occasional light rain, and Mayon was hidden in the clouds. But we didn’t want to miss the view of the volcano from this spot.

So, we found a jeepney (there are many jeepneys you can get from every main boulevard in Legazpi) going to Cagsawa. You can just ask the jeepney drive whether it is going to Cagsawa, but to make the things easier, better ask your hotel jeepneys with which signs should you stop, as we did. The jeepneys don’t go exactly to Cagsawa, but some 200 m before it. You can see a T-junction with a stone model of the Cagsawa Church tower and a sign “Welcome to Cagsawa”. Stop there and get on the right. After 5 mins walk you will be at the gate of Cagsawa. The entrance fee is 20 PHP.

When we entered the Cagsawa Ruins Park, it was still cloudy. But we were patient. We explored the ruins of the destroyed town, then just sat down in front of the volcano, patiently waiting for the clouds to reveal Mayon. And it happened. First its foot appeared under the clouds. Then we could gradually see its middle heights. And finally, after 3 hours waiting, we saw its smoking crater, the magnificent top of Mayon Volcano. Our patience was rewarded.

And it was all that we could do to visit Mayon Volcano, because our time in Legazpi was limited. But if you want more of the volcano, you can do two things.

It is a popular and very exciting activity. There are several ATV trails on the foot of Mayon Volcano. Some are shorter and cheaper, other trails are longer and penetrate much closer and higher on the volcanic slopes. They are more expensive, because need longer time.

You can get your ATV from Cagsawa, or in Pawa, the outdoor adventures companies north of Lignon Hill (on the other side of the river). The shortest and cheapest trails are about 2 km, can be made for 20-30 mins and the price starts from 400 PHP/pax. And the longest and most expensive trails reach 24 km, can be made for 3-4 hours and the price reaches 2500 PHP/pax. You can bargain (we tried it), but don’t expect something too much lower. If you wonder how to find an ATV company, don’t worry- when you go to Cagsawa they will find you first.

If you want, however, to explore Mayon Volcano at its best, you have to make a Mayon hike. It normally takes two days and can be a serious adventure with high grade of difficulty, requiring some additional hiking gear. But since 2013, now it is prohibited to reach the top of the volcano. Yes, it is a bit disappointing, but it is for safety precautions, after some hikers died on the top.

There is a so-called Permanent Danger Zone (PDZ), and it is a circle around the top of the volcano with radius of 6 km. You are not allowed to enter PDZ without a licensed guide. So the hikes are possible only with a guide. And the highest point that you can reach, even with a guide, is Camp 2, on 1800 m altitude, if the volcanic forecast from PHIVOLCS allows. This is the situation at least for now. I hope one day the top will be allowed for climbing again, if there could be find a way for safer access than before, but… who knows.

You can ask for a guide in Cagsawa or Lignon Hill. I found the following contacts of guides: Jameel Echaluce Mata and George (+63 0915 762 7169)- seems both of them can be reached on this phone number. According the reviews that I read about them, they are excellent guides, not only with great experience, but also full of knowledge and stories about Mayon Volcano.

We couldn’t climb Mayon Volcano. And we had to leave it. After our Cagsawa trip, we went back to Legazpi Airport, for our flight to Manila. We still enjoyed a great view of the volcano, rising behind the airport and the planes. Then we departed from Legazpi, our plane ascent around the majestic Mayon, until finally it remained as a sharp cone above the clouds and gradually disappeared behind us.

Get more inspired by the video below!

Check out some books about the Philippines, Mayon Volcano and all the volcanoes on Earth!

Disclaimer: Journey Beyond the Horizon is a participant in the Amazon Services LLC Associates Program, an affiliate advertising program designed to provide a means for us to earn fees by linking to Amazon and affiliated sites at no additional cost to you.As an Amazon Associate I earn from qualifying purchases. 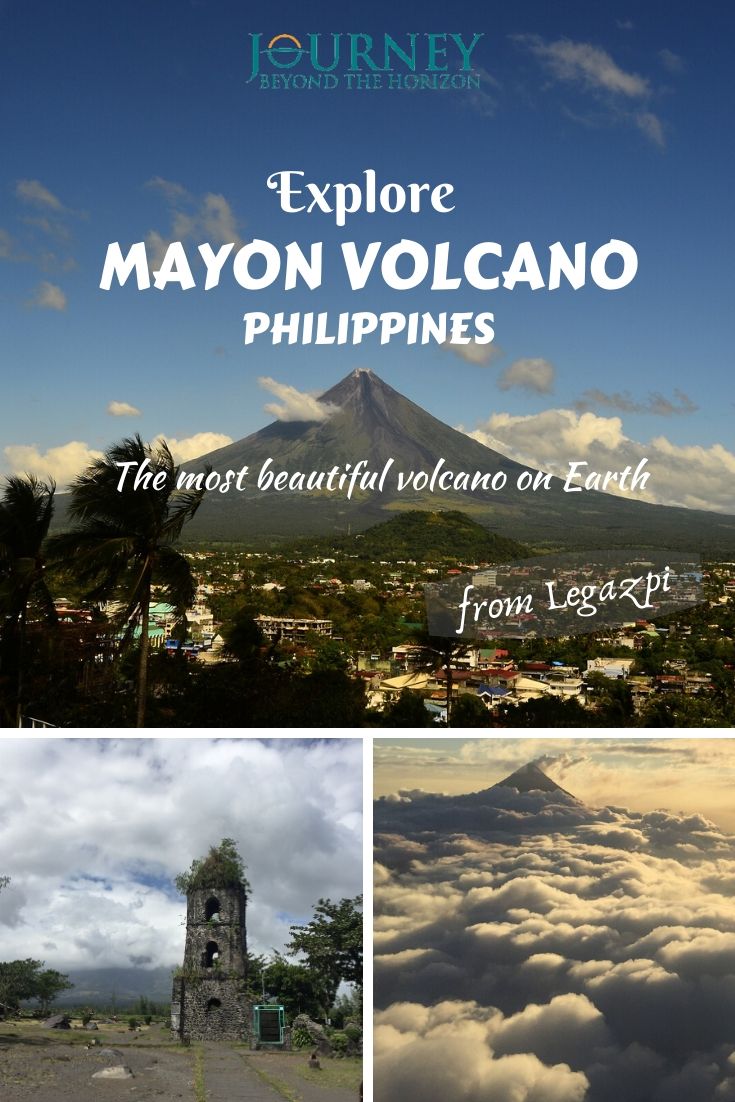 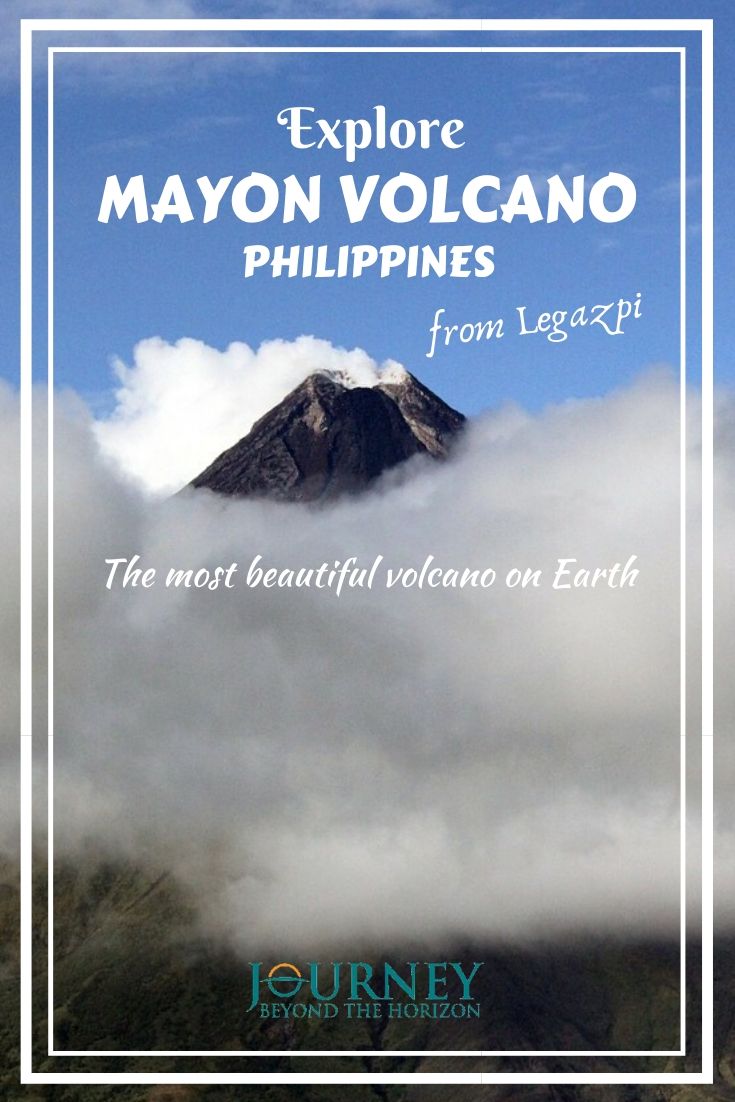