Two days isn’t a lot of time, but it’s enough to see most of the things that Lisbon is famous for around the world. Explore the city’s most popular neighborhoods, see the best-known landmarks and tourist attractions, and visit some of its top-rated restaurants.

A hilltop Moorish castle, an iconic 16th-century tower, and Lisbon’s oldest neighborhood are just a few of the places that you can visit during your stay in Portugal’s capital city. Read on to see all the other famous attractions that you should visit during your two-day stay in Lisbon, one of the pearls of the Iberian Peninsula!

Day One In Lisbon

Your first day in Lisbon is the perfect time to explore all the landmarks and attractions in the city center. A cast-iron elevator, a Moorish castle, and an iconic city plaza are a few of the attractions in downtown Lisbon that are all pretty close to one another.

One of the first attractions you should visit in Lisbon should be the Praça do Comércio. The city’s iconic waterside plaza is lined with cafes, making it the perfect place in Lisbon to enjoy scenic views with a cup of coffee.

The vast square also features views of Arco da Rua Augusta and Cais das Colunas. The former is a 19th-century triumphal arch and the latter are historic stone pillars in the 18th-century quay.

Whether you actually sit down for coffee or not is entirely up to you – in any case, by visiting the city’s famous plaza, you’ve covered three Lisbon landmarks in just a few minutes!

The Santa Justa Lift is another famous Lisbon attraction that you shouldn’t skip. The cast-iron elevator connects the lower city streets with Carmo square, and it offers mesmerizing views of the Lisbon skyline.

As soon as you get out of the elevator at Carmo Square, you’ll notice a huge Gothic church just below you. That’s the Carmo Convent, and it’s another Lisbon attraction you should make time for, especially if you’re into museums and Gothic architecture.

The church is best-known for the spectacular roofless nave, as well as an open-air museum that boasts an extensive collection of various archaeological findings.

Castelo de S. Jorge is an 11th-century Moorish castle that sits atop a hill in downtown Lisbon. It’s one of the most popular attractions in the city, and definitely one you should visit even if you’re in town for just two days. Explore the palace ruins, admire the views from the stone walls, and pop inside the archaeological museum for a quick tour, if you have the time.

The castle grounds feature a scenic viewpoint, which alone makes the exhausting climb up the steep steps worth it. The view stretches all the way to the massive statue of Jesus Christ in Almeda, with countless Lisbon rooftops and the Tagus river in between.

The Lisbon Cathedral is the oldest church in the city, as well as the seat of the Patriarchate of Lisbon. It was originally constructed in the early 12th century, but over the years the church has been hit by many earthquakes and reconstructed several times. Because of the multiple reconstructions, the church is known for featuring several different architectural styles.

The cathedral boasts elements of Gothic, Romanesque, Baroque, and Neoclassical architecture, so it’s definitely worth visiting if you want to see a truly unique Lisbon building. It was designated as a Portuguese National Monument in 1910, because of its historical, architectural, and cultural importance for the city of Lisbon

Alfama is the perfect place to end your first day in Lisbon. The city’s oldest neighborhood is home to some of its best restaurants, as well as countless venues where you can listen to Fado. There’s even a Fado Museum here, which is a good place to visit if you’re genuinely interested in the authentic Portuguese music genre.

Walk around the steep streets of this charming neighborhood and take another good look at the Moorish castle and the Lisbon Cathedral, visit some of the shops that sell traditional crafts to shop for souvenirs, and end your first day in Lisbon with a dinner in one of the city’s longest-running restaurants.

Your second and final day in Lisbon is a great time to head west of the city center, to the Restelo neighborhood. Even though it’s not centrally located, this lively neighborhood features quite a few cultural attractions, some of which are Lisbon’s most famous landmarks!

The Belém Tower is one of those famous landmarks you can immediately place when you see it in a picture. You might not know anything about it, but you know that it has something to do with Portugal.

The medieval tower is absolutely fascinating, and definitely an attraction you should make time for if you have just two days in Lisbon. Visit the tower’s rooftop terrace for some mesmerizing scenic views, or just book a table at one of the nearby restaurants, and enjoy a delicious dinner with spectacular tower views.

Padrão dos Descobrimentos is a concrete monument just a 10-minute walk away from the famous Belem Tower. The riverside walk is quite scenic, and the huge monument is impressive enough that you should definitely check it out while you’re in this part of Lisbon.

Jerónimos Monastery is one of Portugal’s UNESCO World Heritage Sites, so it’s definitely an attraction worth checking out during your limited time in the city. It is one of the best examples of Portuguese Gothic Manueline architecture style, and it’s a must-see if you’re at all into architecture.

The famous monastery is also home to two popular Lisbon museums – the National Museum of Archaeology and the Maritime Museum. The former showcases various archaeological treasures from Portugal, while the latter boasts an exhibit that details the country’s seagoing history.

The Maritime Museum is generally more popular out of the two, so if you have to choose between the two museums, pick that one.

Just some 20 minutes from the amazing Gothic monastery you’ll find an even more incredible historical landmark. Palácio Nacional da Ajuda is a neoclassical palace that functioned as the residence of Portugal’s royal family back in the 19th century.

Today it’s a museum of decorative arts that takes about an hour to tour. If you’re into royal palaces, lavish furniture, and imposing chandeliers, you’ll certainly enjoy a quick tour of this palace.

Sanctuary of Christ the King

Get in a taxi or an Uber and head to Almeda to see the Sanctuary of Christ the King. This iconic statue of Jesus Christ was modeled after the one in Rio de Janeiro, and it’s absolutely an impressive sight.

There’s an elevator that will take you to the foot of the statue, from where you can admire some of the best views of Lisbon. Seriously, the views are so good that they’re absolutely worth the hassle of trying to find your way to this part of Portugal’s capital.

You’ll also get a good look at Ponte 25 de Abril – the imposing Golden Gate-style bridge that links Almada to Lisbon.

Anna was born to travel the world having studied languages all her life. Although she has traveled the world, she now calls Switzerland home and spends her time writing about her experiences on Expert World Travel. You can follow her on Facebook, Twitter, and Pinterest.

Get more inspiration from the video below!

Take a look at some books about Lisbon: 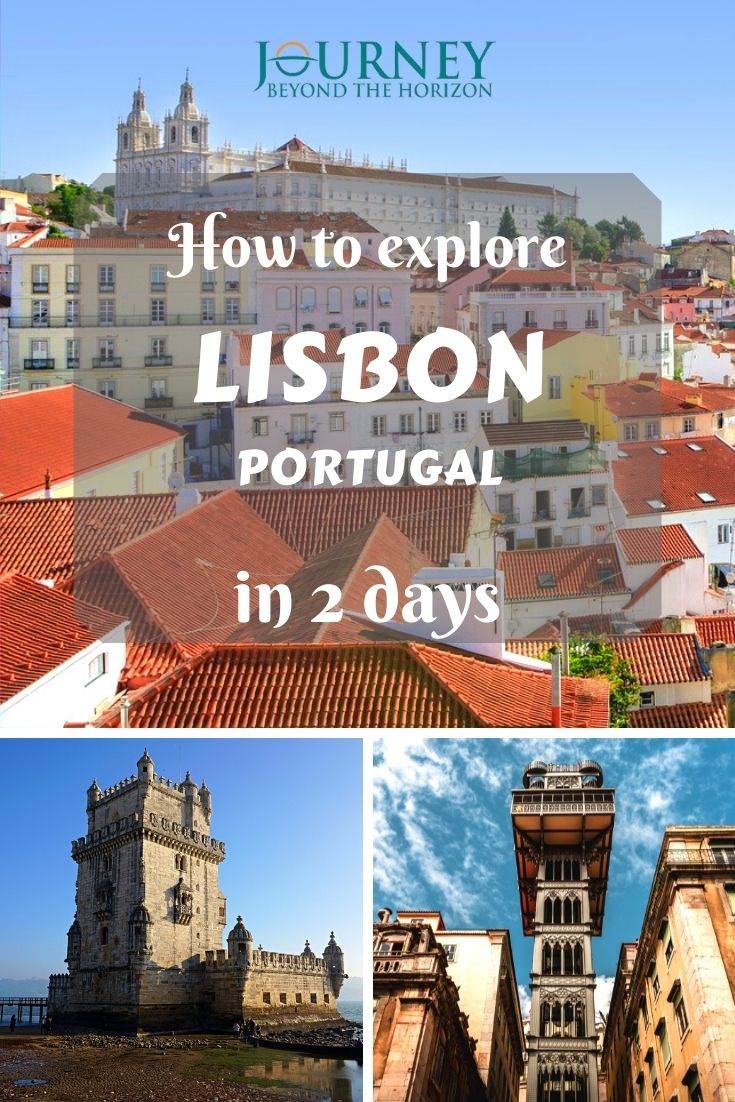 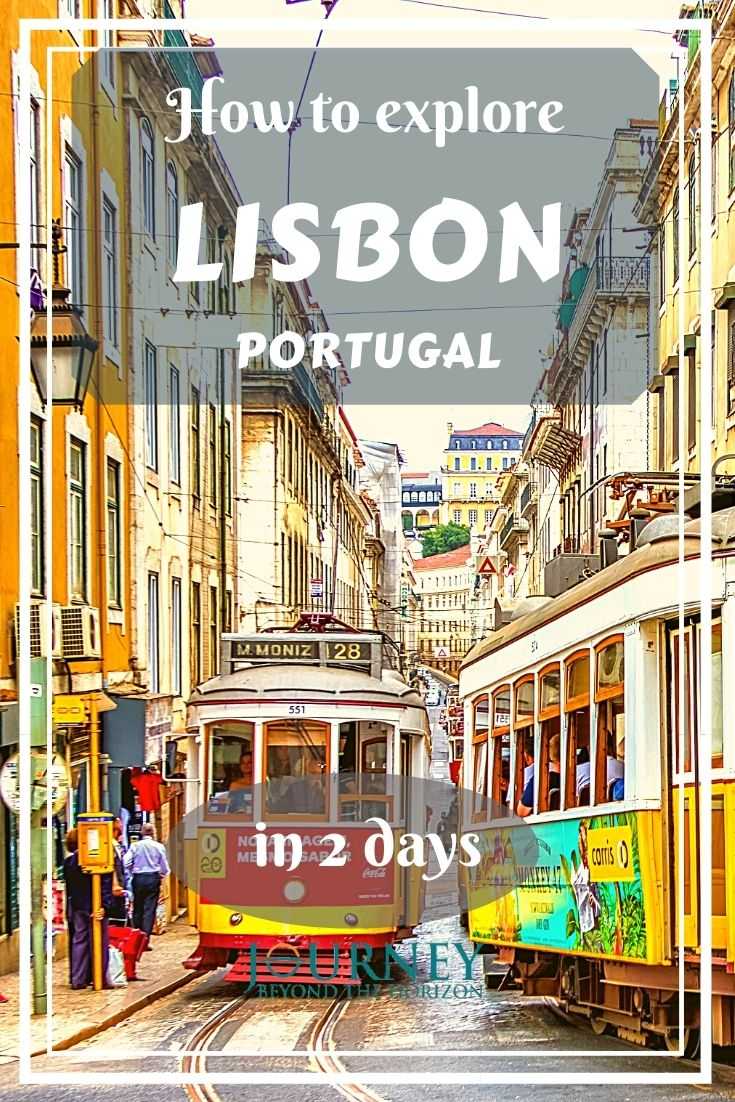